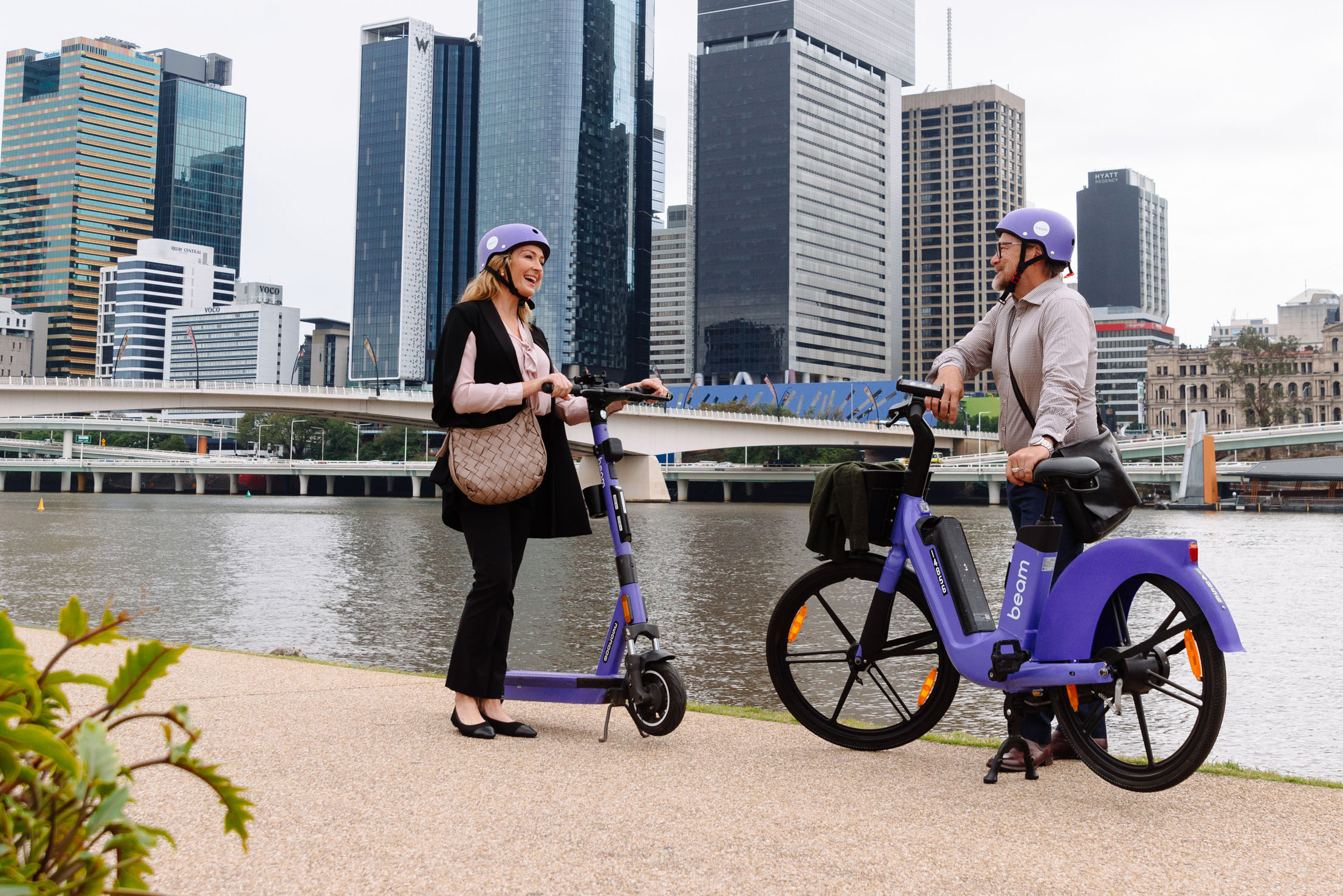 [27 October 2022] Global micromobility company Beam has unveiled its latest e-scooter - the Saturn 5 - bringing its fifth-generation e-scooter to the streets of Brisbane ahead of an expansion into Bulimba and Hawthorne and first-and-last-mile trials at Buranda, Greenslopes and Holland Park West Busway stations.

Latest research from Beam reveals that 40% of Beam riders are more likely to consider public transport as an option for long journeys, over cars or ridesharing, if they have the option to rely on e-scooters and e-bikes for first and last mile transport.

48% of Beam riders reveal they already utilise e-scooters and e-bikes for their first and last mile connections, with 22% of Beam riders saying they “always” or “usually” do as part of their trips in the city.

“Already, over 50% of shared e-scooter journeys in Brisbane are for commuting and essential travel, which makes this next expansion a great time to introduce an upgrade to the e-scooters Brisbane residents get to use as we kickstart two new trials,” says Beam’s ANZ General Manager Tom Cooper.

“The Saturn 5 e-scooter was developed particularly for mature e-scooter markets like Brisbane, catering for longer commuting journeys with features like wireless phone charging and auditory alerts, as well as improved geo-fencing capabilities to ensure safe operation of micromobility alongside other modes of transport.”

The Saturn 5 features an upgraded IoT, feeding not just off satellites but off information gathered from the vehicle’s own systems.

The result is centimetre-perfect position accuracy, ensuring riders remain inside local council and government-approved micro-mobility vehicle use zones, and swift action as the rider moves between zones with differing restrictions.

Building on the previous generation of e-scooters that featured phone holders for rider ease, and to ensure all riders had their hands off their phones, the Saturn 5 repositions this mount to the centre of the vehicle, a change that allows the rider easier access to the safety features close to the handlebars.

The Saturn 5 also features new-generation clear audio messaging, with safe riding reminders and riding zone changes now delivered audibly as well, so riders can listen to instructions and don’t have to take their eyes off their journey.

For those who prefer visual cues, the Saturn 5 conveys riding notifications when entering and leaving slow zones, no parking zones and other riding areas, via an on-screen display.

“We deliver these instructions in our app as well, especially for those who are hearing impaired, but we’ve also found the audible alerts increase rider compliance with the riding rules, and the on-screen display provides an additional cue,” says Cooper.

To further insulate the rider from unevenness of roads and pavements, the Saturn 5 features a larger front wheel, giving riders an increased sense of confidence whilst on the scooter.

And a small but significant update to the hardware on the Saturn 5 is the noticeably smaller handlebars, designed for better grip and quicker access to the safety features alongside the handlebars, including the brake levers, left and right indicators, and bell.

The vehicle has also been designed with sustainability at its core, with the Saturn 5 boasting an incredible 120 kilometres of battery life, the longest capacity of any vehicle in the shared micromobility space.

The Saturn 5 will be joined by Beam’s upgraded Apollo e-bike, featuring hands-free phone holders with wireless charging, an improved ergonomic design for longer trips more customary on an e-bike, and increased carrying capacity in the bike basket.